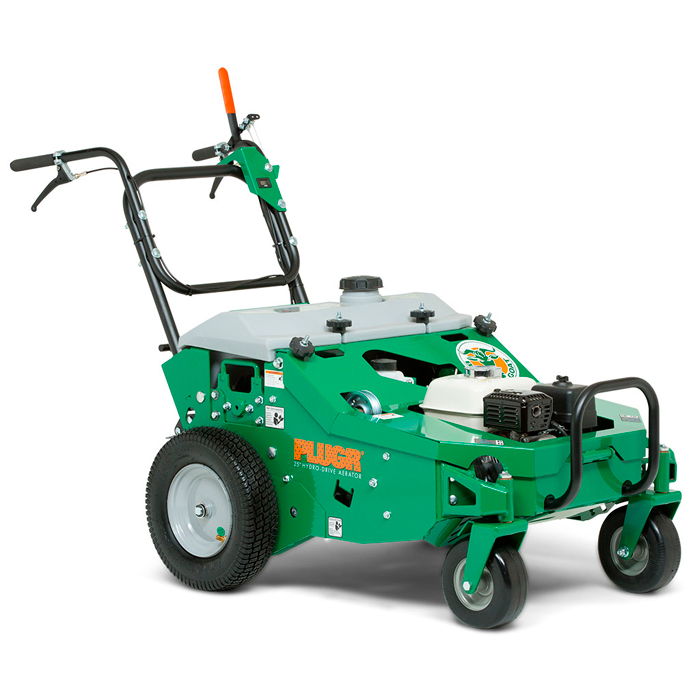 Availability: Sorry, Currently Out of Stock

Carriage: Free of charge delivery to UK Mainland, this does exclude Islands and the Scottish Highlands, to check please call or click here for more information...

Free 1 Litre of WGM 10W40 Oil with this machine

The Patent Pending EZ Drop™ tine system has a one-step tine engagement lever from the handle that quickly engages tines when the lever is depressed or disengages tines when the lever is released to pass over obstacles in the aeration path for uninterrupted aeration. It also features "in-ground" steering for unmatched maneuverability, ergonomics, ease of turning, improved production, reduced downtime and turf repair when compared to drum aerators.

This PL2501SPH self propelled aerator is powered by a 196cc Honda engine.

Patent Pending EZ Drop™ Tine Engagement - Depressing the orange tine lever releases the tines from the lifted locked position and engages the tining action. When the tine engagement handle is released, tining action stops and the tines drag across obstacles in the aeration path for uninterrupted aeration and increased productivity.

No Tool, Flip-Up Hood - For best in class access to the inside of the machine for easy service plus improved belt access.

* Whist we try to keep our stock availability correct it is not always possible, if in doubt please call to check prior to placing your order.

** Free delivery is not applicable on all items. Smaller items, some medium items such as spas, larger ride-on machines outside of our local area and deliveries to the highlands and Islands, will have carriage applied.